After two years of negotiations, the Liberal government has offered only 1.25 days of leave per year, for 4 years, as general compensation to every member who has fallen under the disastrous Phoenix system. PSAC could not agree to this meagre proposal.

The 1.25 days per year is far too little to compensate or even recognize the massive impact that Phoenix has had on peoples’ lives. Over 270,000 workers have been directly impacted and suffered financial losses. Many were also forced to delay career advancement, cancel parental leave, experience high levels of anxiety, reduce their support of family members, and delay retirement – to name a few of the serious adverse effects. There remains a backlog of 240,000 cases to be resolved. More than 100,000 workers are still waiting to have their last collective agreements implemented.

This offer, also contains other elements that we cannot accept, such as imposing a $1500 threshold before some claims for compensation can be filed. In addition, many members would be unfairly prevented from cashing out the leave offered due to restrictive provisions in their collective agreements.

Our members make up the bulk of the federal public service and have suffered enormous damage because of the Phoenix pay system. Yet they have kept showing up to work every day, delivering the critical services Canadians depend on. Our union will not trade in four years of our members’ pain and suffering for a settlement that does not adequately compensate for the terrible toll Phoenix has had on their lives and that of their families.

In the days and weeks ahead, PSAC will continue to negotiate with the government to secure fair compensation for our hard-working members – they deserve nothing less.

Phoenix damages : everything you need to know about what we are negotiating 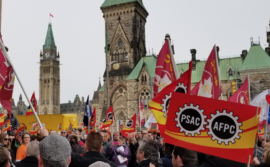 Much of what PSAC members have heard about Phoenix damages focuses on the government’s general damages offer of five days of leave for the last four years of hardships. You may not know that we’re negotiating more than just compensation for general damages. Here’s the breakdown: A three-part settlement The Phoenix compensation agreement we are […]