The Customs and Immigration Union is a component of the PSAC. Our members benefit from the strength that comes from being part of the largest federal public sector union in Canada.

The CIU does not tolerate bullying, harassment or intimidation. Whether at a union event, on social media or in the workplace, we have always taken a firm stance on tolerance, respect and dignity. Our members have the right to ask questions, especially of their union, without being made to feel belittled or attacked.

The PSAC decided to offer a webinar in the wake of the killing of George Floyd. CIU applauded that initiative and believed it would be informative and beneficial to our members.

By creating a provocative webinar title – An Introduction to Anti-Racism for White Folks – we can only assume that the facilitators wanted to spark debate and were encouraging participants to explore why white people need to engage more fully in the anti-racism initiative. In other words, sparking questions creates a teaching moment, and that’s a good thing.

On social media, a PSAC member asked exactly the question that the title of the seminar was designed to elicit. Why was this webinar only for white people?  Instead of using the question to explore the content of the webinar, one of the facilitators simply told the member to “eat shit”.

The controversy that followed is not about racism. It’s about respect. At CIU, we want our members to receive the best possible training from the most competent experts we can find. Clearly, this isn’t it.

The CIU represents over 11,000 workers, many of whom are law enforcement professionals. While we stand behind global efforts to combat racism, we advocate for a reasoned and informed approach to education and change. We all need to do better but believe that sweeping generalizations about law enforcement don’t move us forward.

We believe that the comments surrounding the PSAC webinar are offensive and inappropriate. We also believe that our members deserve better and should not be subject to abuse when they engage in discussion with someone who has been contracted to speak on behalf of their union.

The PSAC is a democratic organization. In light of recent discussions, one of which held by the PSAC National Board of Directors, an earlier decision to remove Nora Loreto from her role as one of the webinar’s facilitators was reversed. The CIU did not support this decision. We continue to find her comments and behaviour indefensible and question her ability to facilitate a productive and inclusive discussion. As such, we are not encouraging our members to participate in this webinar.

Again, the CIU’s decision to distance itself from the PSAC’s webinar is about respect. The CIU is working on a number of anti-racism initiatives and continues, as always, to support all efforts to put an end to racism.

We believe that this goal can be achieved through inclusive, constructive and respectful dialogue. 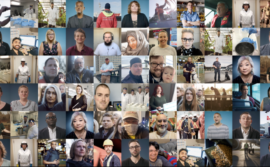 This National Public Service Week— June 14 to 20—PSAC is celebrating and honouring the critical role of Canada’s federal public service workers. Never have their important contributions been highlighted so starkly than by the COVID-19 pandemic.