Just hours after announcing that Canada Border Services Agency (CBSA) employees had voted overwhelmingly in favour of strike action at Canada’s borders, unionized workers and the employer – CBSA and Treasury Board Secretariat – agreed to return to the table to resume negotiations on July 29.

“The government is clearly concerned about our strike mandate and the possibility of major disruptions at the border,” said Chris Aylward, PSAC national president. “We’re going back to the table with an open mind, but we’ve been crystal clear that if they want to avoid a strike, they need to bring a new mandate to address major workplace issues.”

Negotiations resume the day after the Public Interest Commission (PIC) released its recommendations for both parties to reach a deal, including many improvements to the working conditions of CBSA employees. Read more about the PIC’s recommendations.

With the release of the PIC report, The Public Service Alliance of Canada (PSAC) and the Customs and Immigration Union (CIU) can legally call a strike on August 6 if a deal is not reached.

“Going back to the table is a step in the right direction, but the fact remains that we are grappling with systemic workplace harassment issues that the employer must be willing to address,” said Mark Weber, CIU national president. “Beyond needing stronger protections against a toxic workplace culture, our members also deserve parity with the broader law enforcement community.”

CBSA employees have been without a contract for over three years. They are seeking better protections against a toxic workplace culture at CBSA, and greater parity with other law enforcement agencies across Canada. The union declared impasse in December and applied for a Public Interest Commission hearing after CBSA and Treasury Board were unwilling to address these concerns. 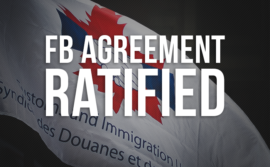 PSAC-CIU members in the Border Services (FB) bargaining unit have voted overwhelmingly in favour of the tentative agreement with the Canada Border Services Agency (CBSA). The FB group represents over 8,500 CBSA employees who have been on the front lines of the pandemic since day one, protecting our borders and keeping Canadians safe. The new contract is […]