Bill C-27, An Act to amend the Pension Benefits Standards Act, is an attack on the retirement security of Canadians.

This bill will allow employers in the federal private sector and Crown Corporations to shift from good, defined benefit plans that provide secure and predictable pension benefits, into the much less secure form of target benefits. If passed, this bill would open the door to a disturbing trend of shifting all the risk of pension plans onto workers and retirees.

In 2015, Prime Minister Justin Trudeau said that defined benefit pension plans that workers and retirees have already paid into should not be retroactively changed into target benefit plans. Yet, this is exactly what Bill C-27 will do.

PSAC has always stood for retirement security and opposed any move to eliminate defined benefit (DB) pension plans. We urge our members to send a letter to Finance Minister Bill Morneau to tell him and the Liberal government to abandon Bill C-27.

This message was originally published on the PSAC website.

Other articles posted in: Parliamentary Bills 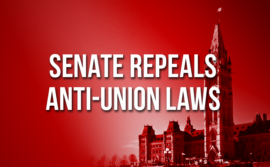 Two Conservative anti-union laws, Bills C-377 and C-525, are now history with the adoption of Bill C-4. “Both of these Conservative bills were an attack on working people,” said PSAC National President Robyn Benson. “Canada’s labour movement mobilized fierce opposition to these laws. This victory is thanks to the vocal solidarity of union members and […]