The session is being convened by the Public Interest Commission (PIC) and will cover both common issues as well as those specific to the PA unit (information for the other Treasury Board units will be forthcoming).

PSAC and the government presented their respective bargaining positions at a PIC hearing on December 4-7.

PSAC will provide an update on the mediation session once it is complete.

What is a Public Interest Commission (PIC)?

Under the law that governs contract negotiations in the federal public service, once impasse is reached at the bargaining table, a PIC is established to help the parties reach an agreement.

The PIC is a panel of three people – a chairperson appointed by the Labour Board and nominees appointed by the union and management. The union and the employer submit briefs and explain their positions on the outstanding issues at a hearing with the PIC. The PIC chairperson also has the option of convening additional talks. The PIC then issues a report with recommendations for settlement. The recommendations are not binding.

Once the PIC releases its report, the union’s bargaining team will meet to discuss the recommendations. Traditionally, following this, PSAC and government representatives have returned to the table to resume negotiations. We expect the PIC reports to be issued in 2020. 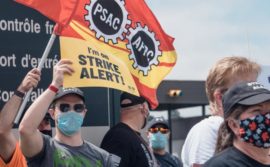 After returning to the bargaining table for two days of renewed negotiations with Treasury Board, talks stalled between PSAC-CIU and Treasury Board July 30. It’s abundantly clear that Prime Minister Justin Trudeau’s government has not given Treasury Board a new mandate to address critical bargaining issues, including protections against a toxic workplace culture at CBSA and greater parity with other Canadian law enforcement personnel. The […]