Home  /  Current Issues  /  Human Rights  /  Transgender Day of Remembrance: A reminder that we can all be better allies

November 20 is a day to honour and memorialize transgender people whose lives were lost in acts of anti-trans violence, and an opportunity to raise awareness around the issues trans and gender non-conforming people continue to face.

The day was started by trans advocate and activist Gwendolyn Ann Smith to honor Rita Hester, a Black trans woman who was murdered in Boston in 1998. Rita’s murder is still unsolved, and too many transgender victims of violence continue to suffer the same fate.

We can all be better allies to our trans colleagues and friends by helping to build safer, more inclusive workplaces and communities. Because trans people deserve to be treated with respect and care — as human beings, like everyone else.

Using inclusive language is one of the ways we can honour Two-Spirt, trans and non-binary people. That’s why PSAC developed a Gender Inclusive Language Toolkit this year to help members, elected leaders and staff interact in a way that respects and celebrates our unique and diverse gender identities.

To ensure trans workers have the support they need in our workplaces, unions and communities, the CLC has also developed the Workers in Transition Guide, which union leaders and members can use to help better protect the rights of trans members.

We encourage you to attend a virtual vigil or find an event happening in your community to recognize the Transgender Day of Remembrance. 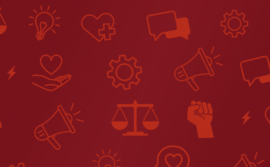 PSAC’s National Women’s Conference will be held in person March 31 to April 2, 2023 in Ottawa with the theme “It’s in Our Hands: Strength, Power & Compassion.”   PSAC women members in good standing are invited to apply to be a delegate to this Conference. As a delegate, you will participate in workshops, attend plenary […]