The Customs and Immigration Union (CIU) can trace its history back to 1906 when employees of the Department of National Revenue (Customs & Excise) decided to organize local Branches at the port level. These Branches affiliated themselves, on an individual basis, to the Civil Service Federation of Canada when it was established in 1909.

In 1919, representatives from each of the local Branches met in Ottawa to form the Customs and Excise Officers’ Association (CEOA). At that time, the daily concerns of the Association were handled by a National Secretary-Treasurer who worked, on a voluntary basis, from his home in Ottawa. By 1948, CEOA had grown to such an extent that the decision was made to establish a full-time National Secretary-Treasurer.

The Public Service Alliance of Canada (PSAC) was formed in November 1966 as a result of the merger between the Civil Service Federation and the Civil Service Association. CEOA, with 6,900 members, changed its name to the Customs Excise Union Douanes Accise (CEUDA) and became one of the seventeen (17) PSAC Components.

In 2008, after the integration of certain Agriculture services and the totality of the Immigration inland enforcement services, the delegates of the 15th National Convention of CEUDA voted that from now on, this organization will use the name of Customs and Immigration Union – Syndicat des Douanes et de l’Immigration (CIU-SDI). This new name concisely and inclusively reflect, with an internationally-recognized wording, the work and the services offered by our members, who are the pride of our Union and the Canadian population.

The CIU has 23 district Branches across Canada. Every three (3) years, members from each Branch elect their own Branch Executive (President, Vice-Presidents, Secretary and Treasurer). Stewards are also elected at this time. Branch Executives carry out Branch business in accordance with CIU Branch Rules, which are superceded by CIU By-Laws and the PSAC Constitution. 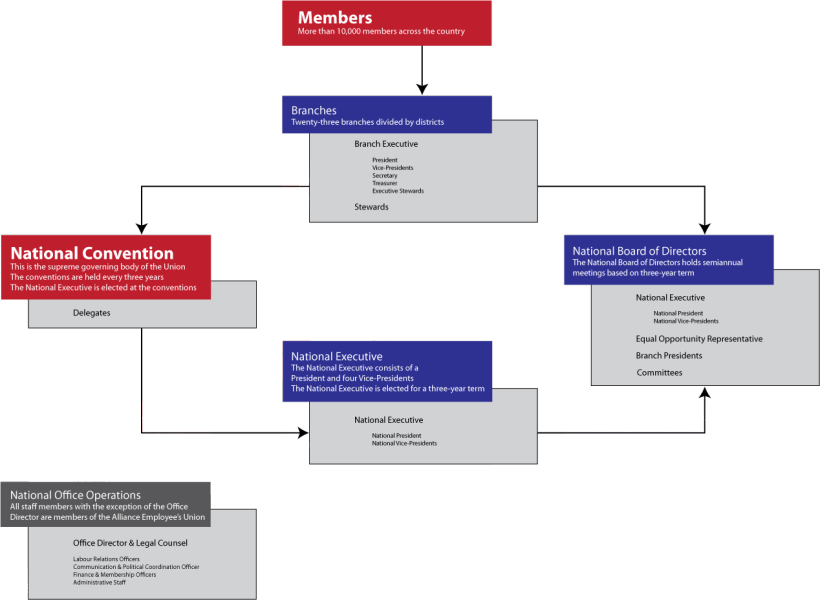 The Customs and Immigration Union is one of the 15 components of the Public Service Alliance of Canada which represents more than 170,000 workers in every province and territory in Canada and in locations around the world. PSAC members work for federal government departments and agencies, Crown Corporations, universities, casinos, community services agencies, Aboriginal communities, airports, and the security sector among others. PSAC is headquartered in Ottawa with 23 regional offices across Canada.