Home  /  What If Talks Break Down?

If bargaining talks break down and reach an impasse, the next step is proceeding to  filing for a Public Interest Commission (PIC). Here are a few frequently asked questions about this process. 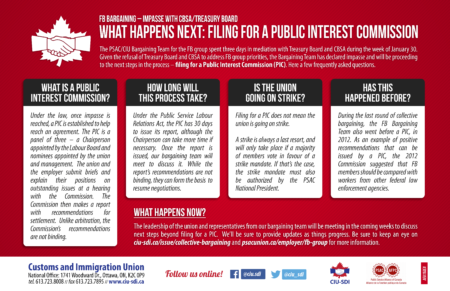 Infosheet: Filing for a PIC (February 2017) (Click for larger version)

What is a Public Interest Commission?

Under the law, once impasse is reached, a PIC is established to help  reach an agreement. The PIC is a panel of three – a Chairperson appointed by the Labour Board and nominees appointed by the union and management.  The union and the employer submit briefs and explain their positions on outstanding issues at a hearing with the Commission. The Commission then makes a report with recommendations for settlement.  Unlike arbitration, the Commission’s recommendations are not binding.

How long will this process take?

Under the Public Service Labour Relations Act, the PIC has 30 days to issue its report, although the Chairperson can take more time if necessary. Once the report is issued, our bargaining team will meet to discuss it. While the report’s recommendations are not binding, they can form the basis  to resume negotiations.

Is the union going on strike?

Filing for a PIC does not mean the union is going on strike. A strike is always a last resort, and will only take place if a majority of members vote in favour of a strike mandate. If that’s the case, the strike mandate must also be authorized by the PSAC National President.

Has this happened before?

During the last round of collective bargaining, the FB Bargaining Team also went before a PIC, in 2012. As an example of positive recommendations that can be issued by a PIC, the 2012 Commission suggested that FB members should be compared with workers from other federal law enforcement agencies.