On Thursday October 20, 2022, the National President of the Customs and Immigration Union, Mark Weber, addressed the House of Commons Standing Committee on Government Operations and Estimates as part of the Committee’s study on the ArriveCAN application.

Speaking to the Committee, the CIU National President was critical of the Agency, pointing to the utter lack of consultation with frontline officers — both in the context of  ArriveCAN and in general. “What’s perhaps most vexing about ArriveCAN is how it was developed without any meaningful consultation with, or input from, frontline officers. Not when the idea was first proposed; not when the app was initially developed; and definitely not at any point during one of the more than 70 updates that the app had to undergo” the National President told the Committee, explaining that it “defied reason” to develop an application designed for the frontline without involving those who serve at the border. Had officers been involved, they would have been able to flag potential issues — of which ArriveCAN saw plenty — before they arose.

The CIU National President also pointed to the decision to fund the development of ArriveCAN at the expense of more pressing issues, such as the ongoing severe staffing crisis, as highly problematic, comparing it to “putting up wallpaper before pouring the foundation”, and highlighting that “by choosing to sink dozens of millions of dollars into ArriveCAN while its border services workforce is understaffed and overworked, the federal government is simply gambling with Canada’s ability to maintain a safe and properly functioning border.”

ArriveCAN is not the only issue

ArriveCAN is certainly not unique at CBSA. It is only one example in a long line of technological band-aid solutions that ultimately fail to enhance border security and effectiveness in any real way: Primary inspection kiosks, E-Gates, remote reporting, etc. What these also have in common is that they are always developed without involving the frontline personnel who actually works at the border.

“What the government and CBSA can learn from the ArriveCAN experience is that, if they want to effectively and properly manage our border, while ensuring that the projects designed to do so are sound, they must rely on and seek out the expertise of frontline border officers in a meaningful way” concluded Mark Weber. “Our members are proud of the work they do, they’re proud of serving Canadians, and I know they would jump at the opportunity to help improve our border processes.”

Other articles posted in: Border Security, Understaffing and border delays 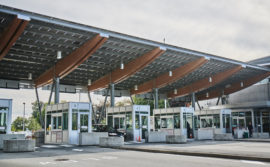 On Tuesday September 27, 2022, the National President of the Customs and Immigration Union, Mark Weber, addressed the House of Commons Standing Committee on International Trade for the second time this year as part of the Committee’s study on the potential impacts of the ArriveCAN application on certain Canadian sectors. Speaking to the Committee, the CIU National President […]