At the 2022 PSAC National Triennial Convention, delegates voted to build a more inclusive, equitable, and representative union by updating our use of the acronym LGBTQ2+ to 2SLGBTQIA+. This change is the result of PSAC’s ongoing commitment to promote equity for all our membres, especially those who have been marginalized.

Resolution CS-045 updates Section 15, Subsection (1) of the PSAC Constitution to be more inclusive of our gender non-conforming members. Enshrining this change in the Constitution is also a tangible acknowledgement of PSAC’s commitment towards reconciliation.

Including Two-Spirit at the beginning of the acronym honours Indigenous peoples’ ways of loving, learning, and building community across Turtle Island (North America) from time immemorial. With 2S at the beginning, this acronym further acknowledges the fact that Indigenous peoples were the first to build communities that honoured sexual and gender diversity on this land.

2S – Two-Spirit: A culturally specific term used by some Indigenous people to indicate a person whose gender identity, spiritual identity, and/or sexual orientation comprises both masculine and feminine spirits or neither.

L – Lesbian: Refers to a woman who is emotionally, romantically, and/or physically attracted to other women.

G – Gay: Refers to people who are emotionally, romantically, and/or physically attracted to people of the same gender.

B – Bisexual or Bi: Refers to a person who is emotionally, romantically, and/or physically attracted to more than one gender, but not necessarily at the same time, in the same way, or to the same degree.

T – Transgender or Trans: An umbrella term to describe a wide range of people whose gender identity and/or gender expression differ from the sex they were assigned at birth and/or the societal and cultural expectations of their assigned sex.

Q – Queer: An umbrella term used by some members of 2SLGBTQIA+ communities to describe sexual orientations, or gender identities that exist outside of heterosexuality or the gender binary.

I – Intersex: Refers to a variety of conditions in which a person is born with a reproductive or sexual anatomy that doesn’t fit into the typical masculine/feminine binary.

A – Asexual or Ace: Refers to individuals who do not experience sexual attraction or have low interest in sexual activity.

+: The ‘+’ sign is an inclusive way to reflect sexual orientations, romantic orientations and gender expressions, such as pansexual, aromantic, agender, and non-binary, among many others.

The language used to describe identities, including romantic and sexual orientations is always changing. When referring to a person’s identity, it is important to respect the words and meanings they use to describe themselves.

People in 2SLGBTQIA+ communities live at the intersection of multiple identities. PSAC seeks to honour this rich diversity, and, as a national union, we are committed to ensuring that all members are included, valued, and respected.

National Day for Truth and Reconciliation: An opportunity for healing and reflection 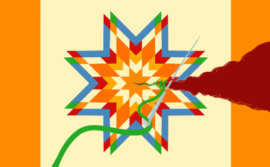 The National Day for Truth and Reconciliation is a day of hope and healing for those impacted by the horrors of the residential school system, and who continue to be triggered and retraumatized through the ongoing confirmation of unmarked graves. Communities across Canada have borne witness to the tragic confirmation of more than 1,100 unmarked graves at […]