Original letter sent to Ralph Goodale, Minister of Public Safety and Emergency Preparedness, and Bill Blair, Minister of Border Security and Organized Crime Reduction by mail on May 13, 2019.

This letter is in reference to the recent federal government’s announcement regarding regulatory changes surrounding the authorization – or lack thereof – for Canada Border Services Agency officers to carry their sidearm while performing their duties at airports in Canada.

To summarize what was communicated to CBSA officers on April 30, 2019:

For the past decade, the Customs and Immigration Union has been consistently vocal about the issue of federal policy preventing Border Services Officers (BSOs) from carrying their sidearm while on duty at all times, including at airports. Minister Goodale will recall my February 2017 and February 2018 letters on the subject.

In February 2018, I noted that “political intervention is required to replace the outdated CBSA and Transport Canada policies that prevent CBSA officers from carrying their sidearms at airports.” When it was announced earlier this year that a new operational solution was in the works, I was pleased to see that my point about political intervention had been taken to heart by your government, and I was hopeful that it would help remediate serious flaws in Canada’s security apparatus. Unfortunately, the announced regulatory changes are as inadequate as they are troublesome.

At first glance, the lack of clarity along with the unanticipated inclusion of time limits raise serious public safety concerns. The restrictions regarding undefined ‘short term activities’ and the imposition of arbitrary time restrictions are, to be blunt, illogical. In no way does it reflect the officers’ reality of dealing effectively and immediately with often unpredictable public safety threats.

When the public or officers are at risk, seconds matter. Having officers who are trained to use and carry a firearm operate without said firearm is a serious gap in public safety. Currently, roughly 85% of BSOs working at Canadian airports are not allowed to have their sidearm on their person, despite being trained under federal standards to do so. Instead, as you know, they are required to keep their firearm locked away. The retrieval process requires approval, which can result in unnecessary and problematic delays.

As Ministers entrusted with important security portfolios, you know better than most that, as mass population venues, airports can be subject to potentially deadly attacks. In previous correspondence with Minister Goodale, I highlighted the 2016 Atatürk Airport and Brussels Airport bombings as well as the 2017 Ft. Lauderdale airport shooting. Since then, airports and their surroundings have remained high-risk locations – the failed explosive device near the Colombo airport during the otherwise deadly series of bombings in Sri Lanka earlier this year springs to mind. In order to prevent similar tragedies from taking place on Canadian soil, law enforcement personnel, including border officers, must be able to deal immediately with any unforeseen public safety threats that could result in the loss of life.

Beyond preventing civilian casualties, it is also crucial for officers to be able to defend themselves when facing threats to their person. Just last year, in February 2018, CBSA officers at Calgary airports were confronted with an individual threatening to “blow [their] heads off” – a serious situation that I brought up to Minister Goodale at the time.

Ultimately, it remains unclear why Transport Canada’s Aviation Security Regulations allow other law enforcement agency officers to be armed while performing their duties at Canadian airports, while this government denies the same treatment to BSOs. CBSA officers should not have to rely on their fellow law enforcement colleagues for protection. As law enforcement officers, they are highly capable professionals who have received rigorous training to operate in a variety of settings, including airports. At the end of the day, this government and CBSA must ensure that their officers are always properly equipped to perform their duties in a safe and healthy environment. Given his extensive background in the law enforcement field, I am certain that Minister Blair will agree that this is common sense.

I will concede that the new policy does authorize officers to carry their sidearm in defined circumstances, and this is a welcomed step toward the formal authorization of CBSA officers being armed at airports. Unfortunately, as noted above, the policy remains vague, and its limitations mean that the situation does not appear to have changed significantly. I would also be remiss not to point out that the announced changes continue to represent a misguided use of resources. Canadian taxpayers pay for officers to undergo the use of firearm training, but due to policies such as this one, they do not reap the security benefits at airports.

In light of these observations, I trust that you will agree with me that the new policy should be revised to allow Border Services Officers to carry their full defensive equipment – including their sidearm – at all times while on duty at airports from coast to coast to coast. Doing so will only enhance Canada’s ability to ensure the safety and security of its citizens and of anyone visiting our country.

As in the past, we will be pleased to assist in any way we can to achieve this important objective.

Other articles posted in: Arming at Airports, Arming Initiative 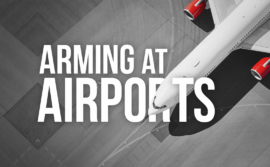 OTTAWA, May 5, 2019 – The National President of the Customs and Immigration Union (CIU) has denounced as “troubling” the recent announcement by the federal government that CBSA Border Services Officers (BSO) will still not be authorized to carry their sidearm at all times while performing their duties at airports in Canada. For years, CIU, […]