Today, the federal government announced it will lift the vaccination policy for all workers in federally regulated workplaces as of June 20, and allow workers who’ve been put on leave without pay because of their vaccination status to return to work without restrictions.

“There’s no doubt we continue to support vaccinations as an important tool to protect workers and our communities from COVID-19,” said PSAC National President Chris Aylward. “But as public health guidelines have been lifted across the country, we’ve been urging the government to review and update their vaccination policy for federal workers.”

Unfortunately, the federal government did not consult with PSAC before making its decision to lift its vaccination policy. Unions should always be consulted on policies that have a major impact on the terms and conditions of employment of our members to protect their health and safety and their rights in the workplace.

In March, PSAC filed policy grievances on behalf of our members who continued to be on leave without pay (LWOP) because of their vaccination status. We argued that continuing this measure was unnecessarily punitive.

Earlier this year, PSAC also launched policy grievances arguing the government’s policy placing full-time remote workers on leave without pay constituted an abuse of management authority because they posed no threat to the health and safety of their workplaces.

“Now that the government has lifted its vaccination policy, we expect members who were unfairly impacted to be compensated,” said Aylward. 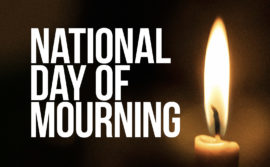 This April 28, on the National Day of Mourning, we will join over 100 countries in remembering those who have lost their lives due to work-related causes. Every year, women and men across the globe die as a result of unsafe working conditions, insufficient health and safety measures and protection equipment, and poorly implemented policies. […]