A few months ago, CIU became aware of a troublesome CBSA initiative regarding the hiring of part-time FB-02s. This practice effectively created a two-tier system within the Officer Induction Model: Part-time BSOs faced a longer assessment period before being promoted to FB-03 and, once promoted, had no guarantee of full-time employment.

Since then, CIU’s 3rd National VP, Joey Dunphy, has brought this matter to several meetings with CBSA executives, while also raising the issue at the Labour Management Executive Committee, the National Labour Management Consultation Committee and at the Bargaining Table.

Another victory for our members

Brother Dunphy’s steadfast advocacy on this question paid off: As of August 1, 2019, all part-time FB-02s are now deployed into full-time indeterminate positions at their respective Port of Entry. We can be proud of this victory for our members and the union!

This is the fifth vignette in a series celebrating our union victories.

As a Border Services Officer, Fiona Johnstone required a fixed-shift schedule to arrange for child care. The employer refused to consider her request, arguing that it had no obligation under the Canadian Human Rights Act to accommodate what it deemed to be her personal choices around childcare. PSAC and CIU supported Ms Johnstone at every step throughout the ensuing lengthy legal battle. Ultimately, the Tribunal found CBSA had discriminated against Ms. Johnstone by failing to accommodate her family obligations.

In 2014, in a further blow to the employer’s narrow approach to family status accommodation, the Court of Appeal upheld the decision, confirming that human rights legislation is to be interpreted in a broad manner and that family status includes child care and other legal family obligations. 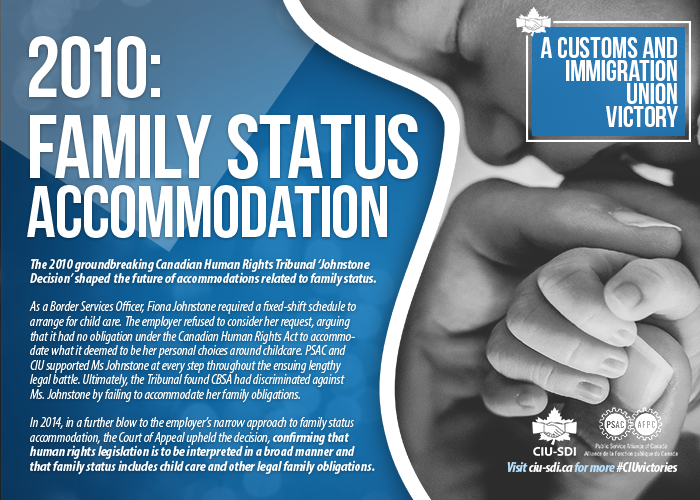 Our fourth historical vignette highlights an important step in border officers being recognized as part of the law enforcement community.

As a founding member of the Canadian Peace Officers Memorial Association, CIU (then CEUDA) was instrumental in ensuring that border officers be present on Parliament Hill to pay homage to those who paid the ultimate price.

A memorial service had first been held in 1977 to honour police and federal correctional officers. By 1994, thanks to union involvement, a separate ceremony was also held specifically for Peace Officers. Finally, in 1996, for the first time in history, Canadian Police Officers and Peace Officers held a joint memorial service on Parliament Hill to honour those who lost their lives in the line of duty.

Today, we can be proud of our Sisters and Brothers who, every year, stand beside their law enforcement colleagues to honour their fallen. 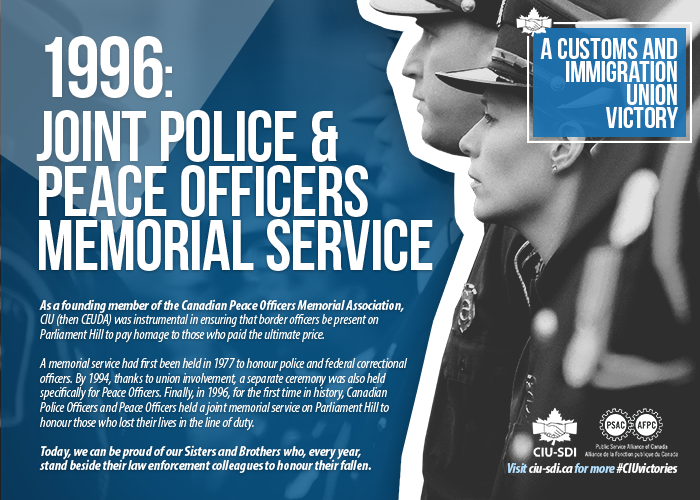 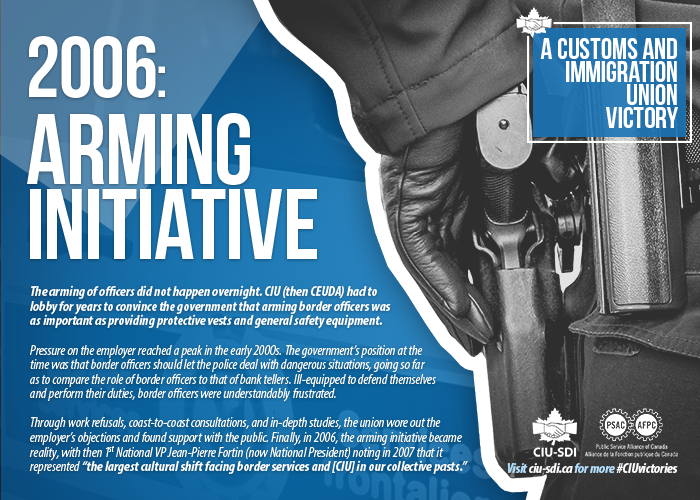 Every two weeks, we’re releasing a short vignette showcasing a victory or an event of importance in the history of our union. Here is the second entry in the series.

At the turn of the millennium, after years of pressure by the union, the government had yet to provide protective vests in suitable numbers to its Customs Officers. Through lobbying in the 90s, CIU (then CEUDA) had succeeded in pressuring the employer to start providing bullet-proof vests to its officers. By 1999, however, the government had only acquired a mere 400 such vests Canada-wide, at times going so far in some ports as distributing them by lottery to officers.

Faced with an employer unwilling to provide adequate protective vests to all officers in a timely fashion, the union launched a massive awareness campaign, attracting the attention of various American police associations. Ultimately, in well-publicized displays of solidarity, the union received hundreds of vests in donation from these associations.

Shamed into doing the right thing, the government relented and announced in early 2000 that budget would be allocated to ensure that all border officers would be provided with a vest. Today, thanks to pressure from CIU and its members, soft body armour is part of the standard equipment available to all Border Officers. 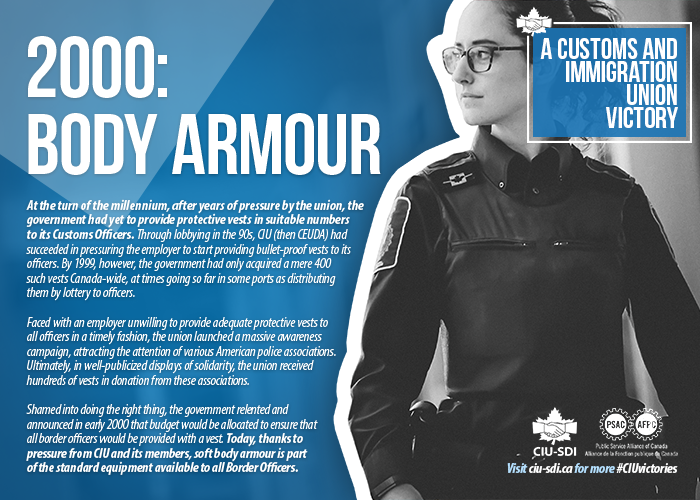