PSAC members stepped up to deliver the government’s massive response to COVID-19 in record time.

Yet the government continues to delay talks for a new contract for nearly 140,000 federal public service workers.

Tell the government to get back to the table. Now.

Go to the PSAC website to send a message to the Trudeau government telling them it’s time to reach a fair deal for public service workers.

A positive Public Interest Commission (PIC) report has been issued for the TC group recommending the employer move on several important issues raised by your bargaining team. The report names a number of TC’s priorities such as closing wage gaps, parity with CFIA for EGs, increased allowances, and movement on the archaic classification system as areas where the employer can improve its offer. Though the report does not recommend everything in our proposals, its support of key issues demonstrates the union’s demands have been fair and reasonable.

Similar to the PA PIC report, TC’s PIC report points to general wage increases and special adjustments as being a major issue that has halted negotiations. It recommends the employer address wage rates if it expects to reach a tentative agreement with the TC group. PSAC expects a fair wage offer that does not require our members to buy allowances for some members out of the overall wage increases for all.

Parity with CFIA for EG Group

The PIC report acknowledged the wage discrepancy between those classified as EGs in the TC group and their counterparts at the Canadian Food Inspection Agency (CFIA). In 2018, your union signed an MOU with Treasury Board stating that there is no difference between EGs at CFIA and at those in the TC group. However, there is still a 3.3% salary gap between those different EGs. The PIC recommends that this gap be addressed.

The PIC report recommends allowances for the following groups:

The report does not recommend specific amounts, nor suggests movement for all groups the union has tabled allowances for. However, PSAC welcomes the recommendation for movement on these specific allowances.

The PIC also recognized the importance of implementing new job evaluation standards. The employer has already missed several deadlines to put in place a new structure and classification system. Though the employer wants another extension until June 2021, the PIC recommends that the employer offer more and urges the employer to have new standards in place before the next round of bargaining. PSAC is seeking substantial penalties, payable from the beginning of 2020, for the employer failing to have the new standards ready for this round of negotiations.

Although National President Chris Aylward has authorized strike votes for the TC bargaining unit, all strike votes are currently suspended until March 30. At that time the union will re-evaluate whether to continue the suspension or resume the strike votes.

Despite the suspension of votes, PSAC will continue to bargain for all units currently in negotiations.

The FB bargaining team continued to push for greater protections against harassment and abuse of authority by management during negotiations with Treasury Board/Canada Border Services Agency March 9-12.

Yet despite buzzwords like promoting inclusion, respectfulness and the elimination of harassment in CBSA’s 2020-2021 Department Plan – unveiled this week ­– there was little evidence of a tonal shift on these or other issues at the bargaining table.

Our team made proposals to enhance protections against abuse of authority and harassment, but management still hasn’t agreed to any of these changes. CBSA is taking the position that language in our contract should continue to be limited largely to sexual harassment. We can’t accept this, as we believe our collective agreement should address all forms of harassment, not just sexual harassment.

We also spoke to our proposed expansion of protections against CBSA management’s heavy-handedness in dealing with our members – including discipline and the arbitrary removal of defensive equipment. There will need to be new protections on these issues in our collective agreement.

There can be no ‘culture change’ without real action

The departmental plan also refers to a long-term reduction in CBSA staff. Our members are already short-staffed and spread thin; PSAC-CIU are prepared to fight any move to reduce staff.

Lastly, the plan speaks of ‘leveraging technology to enable flexibility’, yet CBSA refuses to reinstate fair and reasonable telework practices for Trade Compliance Officers and other non-uniformed personnel.

With respect to wages, our review of recent law enforcement wage settlements across Canada is ongoing – including our monitoring of contract talks for a first collective agreement for RCMP officers. Our position has always been that FB 3s should be matched to RCMP 1st class constables.  In past rounds of bargaining, we’ve always reached agreements with full retroactive wage increases for our members. We have no intention of doing otherwise this round.

We’ll be returning to the table in early May and are in discussions for additional dates into the summer.

We’ll provide updates as bargaining continues. To review the package of proposals that we’ve tabled, and those of the employer, click here.

With the employer still refusing to budge on meaningful improvements, our members are ramping up pressure to be treated fairly: After rallying in Saint John, N.B. at the beginning of the year, FB members are now mobilizing in B.C., where they gathered at the Peace Arch border crossing on February 5.

CIU-PSAC members are calling on the government to treat Border Services Officers with the respect they deserve by withdrawing concessions being put forward at the bargaining table.

For a full list of our bargaining demands, please see this page. 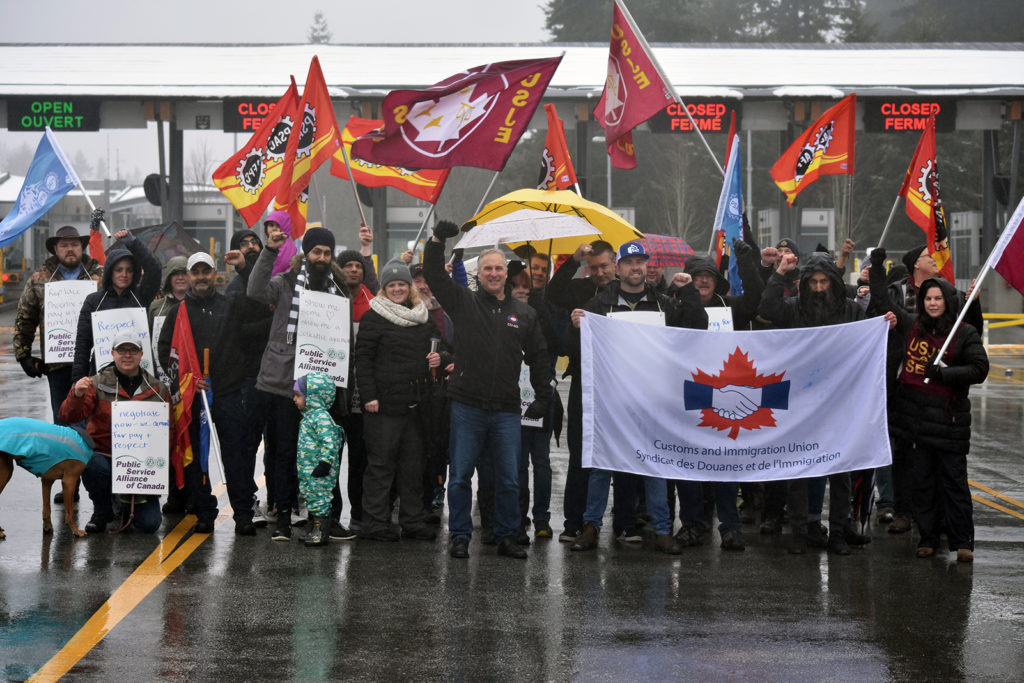 While the PIC recommendations are non-binding, which means the union and/or the employer can accept or reject the recommendations, we are pleased to note that the PIC agreed with some of the union’s proposals specific to the EB group.

While the PIC did not fully address all of our key demands around wage parity and adjustments, it recognized that the employer’s wage offer was inadequate for the two parties to reach an agreement.

The PIC agreed with PSAC’s position that teachers who provide First Nation language instruction should be entitled to the specialization allowance. The Commission “was struck” by the fact that the union’s proposal aligns with the recommendations made by the Truth and Reconciliation Commission and with the federal government’s Bill C-91, the Indigenous Languages Act.

Unfortunately, the PIC didn’t address many of PSAC’s proposals and even agreed to some of the employer’s concessions, such as on Education Leave Without Pay and Career Development. Other examples can be read in the full document on the PIC’s recommendations. In order to reach the fair deal that our members deserve, PSAC will continue to mobilize its membership through increased workplace action, up to and including a strike, until a fair settlement is reached. Stay up to date with the latest on bargaining by signing up for email updates.